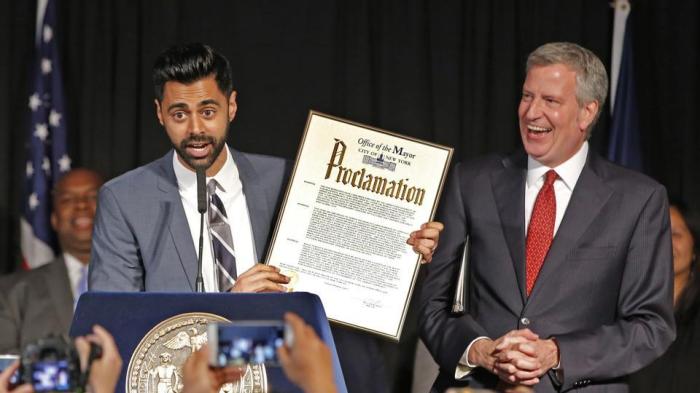 It can be perilous to take comedians too seriously, but here in the United States, with the public sceptical of its news media, comedy is becoming a hugely persuasive and serious form of truth-telling. I’ve been struck by the ascendance of two comics with Indian Muslim backgrounds: Aziz Ansari and Hasan Minhaj. They are among the most recognisable American comedians and are probably the most prominent Muslim American comedians, a statistical improbability since only 3% of Muslims in America come from India.

Now in its second season, Ansari’s Netflix series Master of None is universally watched among people I know (who are, in fairness, the same kind of urban, cosmopolitan “millennials” who populate his show). Minhaj is a senior correspondent on the satirical news programme The Daily Show. He also has a polished stand-up special on Netflix about his immigrant upbringing in California and his encounters with racism both crude and banal.

Their stars have risen in the wake of the election of Donald Trump, whose anti-Muslim rhetoric they reject. Minhaj was the keynote speaker at the annual White House Correspondents’ Dinner, an event marked by Trump’s refusal to attend. Ansari delivered a much-watched monologue as host of Saturday Night Live on the day after Trump was inaugurated as president. “It’s pretty cool to know that he’s probably at home now watching a brown guy make fun of him,” Ansari said.

I grew up in New York in the 1990s. I remember keenly how the diversity I saw in my school and in the streets of the city was rarely found on the TV screen. As an Indian, I also never expected to see other Indians in popular culture. There were almost no Indian actors or roles in American TV. When they did appear, it was always as caricatures — the cartoon deli clerk Apu from The Simpsons (voiced by a white man) or the skinny, nerdy, nervous office worker Samir in the hit film Office Space. In all occasions, Indian figures were accessories, a flavouring of elsewhere, with little interiority and no sense that their beings could carry the centrality of a story.

Though America has always been a racially diverse country, the powers that govern its popular culture long assumed the universality of the white (most often male) American experience. Non-whites — including Asians, Muslims, and Hindus — only appeared in the terms in which others imagined them.

That is slowly changing. Along with black and Latino figures, it’s refreshing and encouraging that the likes of Ansari and Minhaj are finding prominent places in American popular culture. They star not as exotic tokens of another world, but as fully realised individuals.

Neither of their routines relies on using accents or resorting to easy stereotypes. Minhaj bustles about the stage with a febrile energy, his large eyes bulging. Ansari’s main interests seem to lie not in political issues or questions of identity, but in exploring the perils of romance in the digital age (one of the drawbacks of Master of None is how much you have to look at the despair on Ansari’s otherwise cherubic face).

Yes, both Ansari and Minhaj do conjure a somewhat clichéd vision of immigrant childhood: Aloof fathers, strict codes of conduct, and high expectations of professional success. But they enlarge the possibilities available to Indian figures in American life.

Ansari’s character in Master of None is a wine-guzzling, pasta-loving presenter of TV show about cupcakes. In his stand-up special, Minhaj comfortably drifts from Hindi to his American-accented English, showing how natural and inevitable it is for 21st century Americans to switch codes, to live in multiple frames of reference. I’m grateful that both comedians recognise that their Indianness is inextricable. They don’t hunger for acceptance from the heartland.

The cast of Master of None, which includes a black lesbian, reflects a wide range of American identities. Minhaj shares this sense of solidarity. “Because I had to have this dual narrative, I’ve always had a soft spot for other marginalised groups,” he said in a recent interview. “I’ve been able to connect to their civil rights struggle through my own feelings of racism or disenfranchisement.”

What both Minhaj and Ansari capture through their comedy is more than the particularity of the Indian American or Muslim American experience. They insist on the centrality of lives and worldviews otherwise deemed marginal.